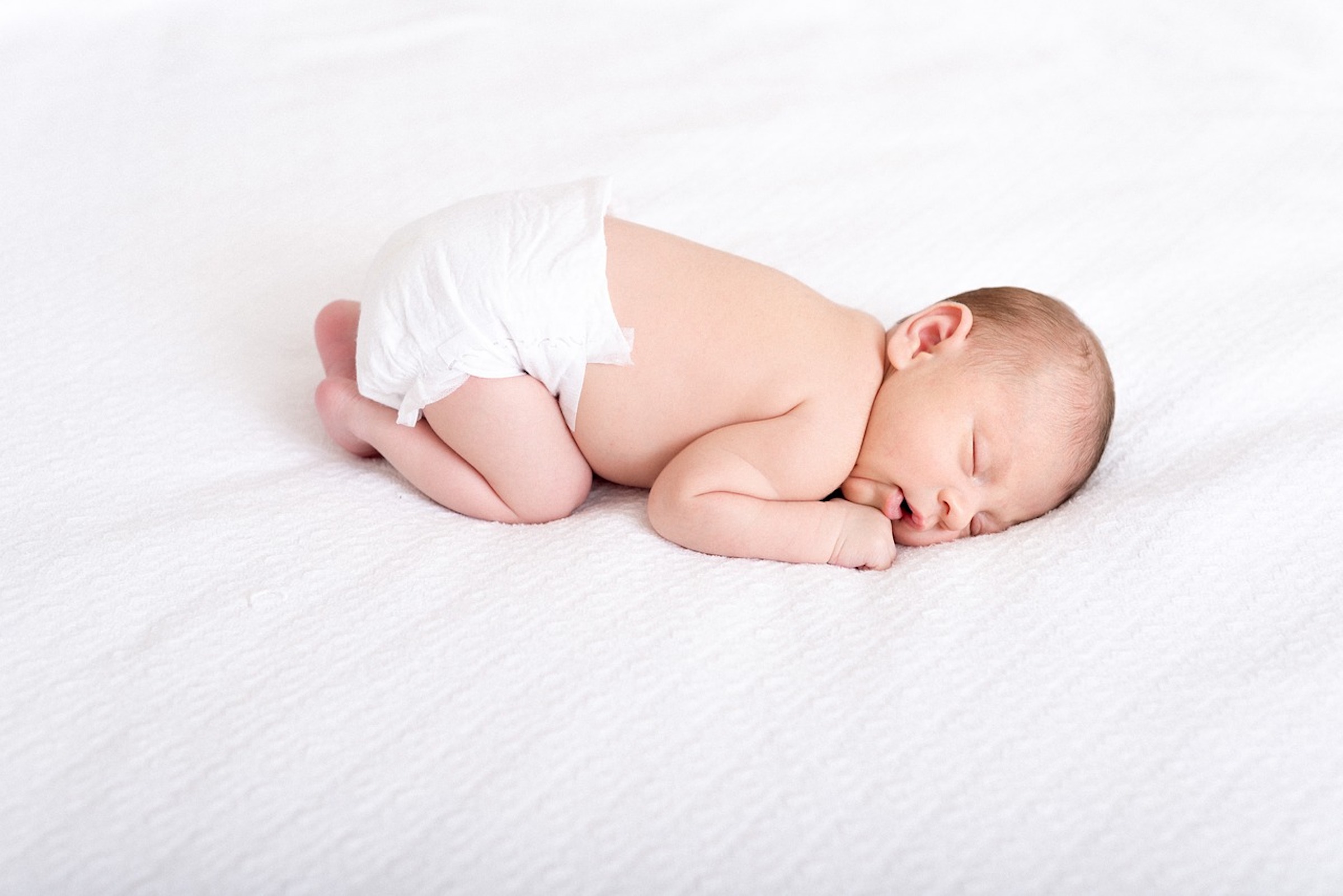 On July 26, 2014, I woke up at about 6:30 a.m. with menstrual-type cramping. I had been having this for a few days and just laying down with a heating pad usually sent it away. I got up and took a nice long, hot shower hoping to send these cramps away as well. I shaved my legs for the last leisurely time. Of course, I denied this being the “real thing.”

I tend to be a hypochondriac, so for fear of overreacting to things, I tend to under-react. Corey and I went to breakfast. I insisted on driving despite Corey’s objections. I denied I was in labor even after driving there and making Corey park the car, because I couldn’t parallel park through contractions.

After breakfast was the farmer’s market, Vitamin Shoppe and Costco. My contractions were about 7 minutes apart and 45 seconds long. I chalked it up to being too active. I checked in with my midwife, Carol, told her not to cancel her plans just yet, and set home to park myself on the couch with a heating pad.

Corey was supposed to record vocals for a band at noon, and I wouldn’t let him cancel it until about 11:15. I was still convinced that if I could only relax enough, they would go away. They had slowed to about every 15 minutes for about 30 seconds after all!

I started a bath, used the toilet and noticed I had lost a bit of my mucous plug (still in denial). While I was in the bathtub reporting the mucous plug to my midwife, I felt the sudden urge to pee, or rather, that I WAS peeing. I hopped onto the toilet and still wasn’t certain but thought that might have been my water breaking. What came out was yellowish and cloudy, not what my urine usually looks like but not what I was expecting amniotic fluid to look like either. I was ready to admit I was in early labor! I have like 24 hours ahead of me, right?

I called Carol again and she suggested she come by to take a look at me. I agreed, but first we have another errand to run! Corey and I had been planning on baking a birthday cake and I didn’t want to even buy the ingredients ahead of time, because I figured I had a long labor ahead and wanted ways to make time pass quickly.

We took a leisurely trip to Nob Hill, complete with contractions in the ice-cream aisle. Yes, we got concerned looks and comments. Corey assured them that, yes, I was in labor, but I’d suck him back up until we got home. We made one more stop on the way home to borrow a rebozo from my birth boot-camp instructor before returning home to find a Comcast truck in front of our house. I completely forgot about our 2 p.m. appointment! Business was conducted quickly and the worker left. I was prepared to watch my Breaking Bad marathon while I labored for the next 22 hours!

Corey and I started to make Henry’s birthday cake together. I don’t think I lasted longer than pulling out the pans. I instructed Corey to keep at it while I labored in the shower for a bit. I put Jim Gaffigan on Spotify and got in the shower. Corey kept coming in and checking on me. He asked me if he should set up the pool and, of course, I said not yet but I saw him roll it past the doorway anyhow. I asked him to call his mom and let her know this was happening.

My mother-in-law, Kathy, arrived and I remember her observing from the bathroom doorway. I was butt naked—I didn’t care. We knew what we were in for. Carol arrived, watched me for a little bit and informed me that we were having a baby! Yay! Carol said she would call my other midwife, Jacqueline. I kept looking at Kathy and saying, “SHE did it. She did it with Pitocin. I can do it.” Corey later told me I was in transition at this point. He overheard Carol relaying to Jacqueline that I was grunting during my contractions.

I could hear Corey baking and filling up the pool in the kitchen. I heard something about a connection giving him a hard time. Later, I found out that instead of hooking up to the kitchen sink and pumping warm water into the pool, he had to fill it with the garden hose and boil pots of water to pour in to warm it up. Baking, boiling and pool filling—so far labor seemed more labor intensive for him than for me! By now it was around 5 p.m., and Corey let me know the pool was ready when I was, so of course I got right out of the shower and into the pool. Jacqueline had arrived by then.

The water. Felt. Amazing. I spent a long time there. Sometime around now, Henry’s birthday cake came out of the oven and was set aside to cool. I made Corey sit on a chair right in front of me. I would go in and out of consciousness. I woke up and asked if I time traveled. I was aware that there were no less than eight eyes on me, but no one was in my face. It was very quiet, I could hear whispering.

Then came the pushing. It wasn’t an “urge”; it was happening. My body was doing it. It had a mind of its own. I hung onto Corey’s leg for dear life. I threw up. I had Corey drape the rebozo over his shoulders and stand up so I could pull down on it. I think somewhere about now I asked how dilated I was. I kept asking, as if laughter wasn’t a clear enough response. Finally, Carol (or someone) told me my cervix was long gone. Wow, that was quick! More pushing.

Carol checked Henry’s heart rate several times in between pushes. She gently recommended I get out of the pool and walk around. Nope, I’m in my happy spot. “OK, but maybe now you might want to walk around?” No way, Jose. “OK, but don’t you have to use the toilet by now?” Someone promised me I could go back into the tub afterward. Trickster. I realized by how they wouldn’t let “getting out of the pool” drop it was probably in mine and Henry’s best interest to listen to them. I found out later that Henry’s heart rate had slowed a little, that the pool had slowed my labor and they were hoping some movement would get it going again.

I reluctantly waddled over to the toilet, my entourage helping me on my way. I labored on the toilet for a bit. I remember at one point wanting, TRYING, to throw everything off of the pony wall next to it. Someone explained to me that I needed to get Henry out, I needed to push with the contractions in an effort to tear my perineum because he had been in the birth canal for a while. If I couldn’t tear, I could receive an episiotomy.

Carol said she could see his head and suggested I feel for myself, as it would give me a better idea as to my progress. I asked if he had hair several times. I was assured that he did and encouraged to feel for myself. I stood up and reached down. I felt … not what it usually feels like down there. I couldn’t tell where I ended and Henry began so, frustrated, I gave up on that venture.

I moved to the birthing stool in front of the toilet. I pushed. Corey wanted me to wait a moment for him to adjust the rebozo during a contraction, my response was to pull harder as if I was trying to break his neck. I pushed as hard as I could. Carol massaged and tried to get my perineum to give up my baby. The words “perineum of steel” were used at one point. I called it, I couldn’t keep pushing like this, I asked for an episiotomy.

Jacqueline explained to me that it wouldn’t hurt, it would just feel like relief. She was right. I realize having written this far that this is the first real mention of pain in this story. The thing is, I don’t recall it being painful. Sure there was pressure. Sure it was uncomfortable, but nothing like the insurmountable pain like they show in the movies. I leaned back on Corey for support as Carol (I think) performed the episiotomy. I didn’t feel a thing. The next contraction, I had an urge to stand up. With Corey’s hands under my armpits, I reached out for more support. I grabbed onto the pony wall with my right hand and reached up for the towel bar with my left hand. In one fell swoop both my baby and my towel bar were liberated from their restraints. My head was spinning. Carol placed something warm, wet and squirmy on my chest, it went “waah” once. I gathered my wits enough to wish Henry a very happy birthday. It was 7:58 p.m.

Henry was squinting, alert, holding his head up. I offered him my breast to nurse from and he took to it immediately. Carol asked me to cough. I half-heartedly obliged and my placenta was liberated as well. We brought our family bubble to the bed for some much deserved bonding.

Henry was beautiful. Corey and I both just stared at him as he nursed and slept. Corey continued the skin-to-skin snuggles as Carol repaired my episiotomy. Henry proceeded to christen Corey “Daddy” with meconium. Eventually, Daddy left to clean both of them up, himself and Kathy putting Henry’s first cloth diaper on as I tried to describe how to do it from across the house. We discovered our cat helped himself to a layer of Henry’s birthday cake. We measured Henry—he was 6 lb., 2 oz, 19 in. long, and 100 percent adorable. I think we’ll keep him.